A lifetime of learning—34 years with type 1 diabetes 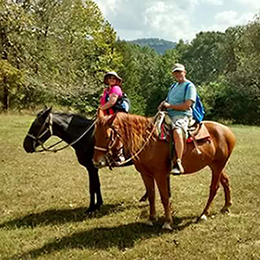 Ashley was 15 when she was diagnosed with type 1 diabetes in 1983. For the past 34 years, she's battled severe lows, figured how to manage her self-care on a shoestring budget, and seen big changes in the tools and learning available. We enjoyed chatting with Ashley about her experience, and wanted to share her powerful diabetes management story with you.

What was it like when you were diagnosed?
I was near death—I'd been sick for quite a while with strep and flu symptoms, so I went to the doctor and they put me on antibiotics, but I didn't get better. Then I started getting the classic symptoms of diabetes—extreme thirst, going to the bathroom a lot, nausea. I went back to the doctor and he happened to have an intern there whose son had diabetes. The intern said I needed to go straight to the hospital. I'd lost 30 pounds—I weighed less than 70 pounds at that point—and I stayed in the hospital for 19 days. My blood sugar was 1148.

How did you and your family handle the news? Diabetes care and knowledge were very different in 1983 compared to today.
When I was first diagnosed, the doctor told me, "You're not going to have children, so don't worry about getting married." Their advice was, "If you live for 20 years, you'll have kidney failure and blindness, so have fun now, but also take care of yourself." I swore that wasn't going to be me. So I got every book about diabetes that I could from the library. I took every Diabetes 101 class they had at the hospital. Looking back, I feel like this is when my life started.

So, tell us about the early days.
When I was diagnosed, we had urine checks, and then meters that were the size of a brick and cost $300. My first one was the Ames Glucometer, and then I switched to the Accu-Chek II meter. Getting a result took about two minutes—you had to put blood on the strip, then wipe it off, stick it in the meter and wait 90 seconds. If you had low blood sugar, it was nearly impossible.

There was no insulin-to-carb ratio, no sliding scale. I took 2 shots of insulin and followed a meal plan with 3,000 calories a day. That's a lot of food for a 15-year-old.

Still, it sounds like you managed pretty well.
Oh, I've had my ups and downs—you can't control everything. I was on 2 shots a day for 15 or 20 years, and there were times when I couldn't afford to go to the doctor, so I adjusted my own insulin. I had a lot of hypoglycemia, and I'd have seizures, which was really scary. There were times I wanted to give up. But I thought, "God didn't put me here just to die. I have a family who loves me and I'm not a person who gives up."

Eventually, I switched to an insulin pen, then 2 years ago I got a pump. I was testing 10 to 12 times a day, then I added a CGM (continuous glucose monitor)—but I still test with an Accu-Chek® Aviva Plus system 4 or 5 times a day.

So, it sounds like you proved the doctors wrong.
Yes—I have 3 beautiful daughters and 8 grandchildren, and my husband Al is my best friend.

He and I are semi-retired, and I'm doing more physical work now than ever before. About 6 years ago, we moved to a small town and designed and built our own house. Just us—we got up every morning and picked up a hammer. We love the outdoors, and if we're not outside we're singing—I play the mandolin and Al plays the guitar.

You're also very committed to the diabetes community—what's next for you?
I'm going to keep being there for people. I'm involved in a lot of type 1 and type 2 groups, because people are getting online all the time, grasping for encouragement. My belief is, we're here to share our experiences. Sometimes we laugh, sometimes we cry, but we're always here to support each other. I just want to give people hope.

Jet lag. Lows. Time zones. How Austin reduces travel anxiety.
A lifelong veggie avoider shifts into a healthier gear
He says. She says. D says. Who gets the last word in a couple with diabetes?