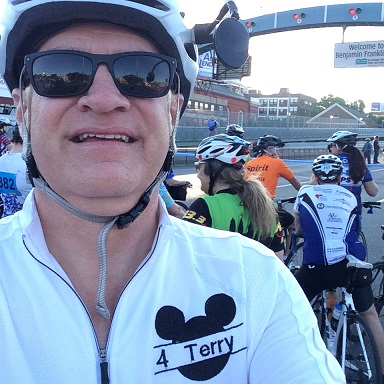 Bennet's been active in the diabetes online community (DOC) since the early days, when two of his four children were diagnosed with type 1 diabetes. We talked to him about that experience, and how it guided his care when his own numbers began to rise.

How did you first get involved in the DOC?

One of my kids was diagnosed with type 1 about 15 years ago, so I immersed myself in learning about diabetes. Then another child was diagnosed. Social media was a great resource for learning about type 1 and type 2. In fact, that's where I first became curious about my own glucose levels.

Early in my journey with the kids' diabetes, I had an annual physical. My blood glucose was checked and the doctor told me that it was elevated. It was 108. I remember laughing—I would be thrilled with 108 for my kids. That was the number that was always on pictures of meters and I couldn't see at as grounds for concern.

The kids are pretty grown up now. What was it like to focus on your own health?

It's a real change in mindset. The gravity isn't as intense. I think the real challenge of type 2 diabetes is that things happen slowly. It's harder to buy into the idea that any one intervention is going to make a difference. With someone who has type 1—especially a child—a small error can be a big problem.

When my numbers started creeping up, I asked the doctor to just put me on insulin—I knew how to do insulin. He laughed, "That isn't the right starting point." We started with metformin instead.

Is that the core of your management?

Actually, the thing that's made the biggest impact is bicycling. I started riding around the neighborhood, and now when the weather is nice, I aim for 50 to 100 miles a week. That's kept me in the "prediabetes" zone—which I don't really believe exists. Diabetes is diabetes. But it seems like there's a point that, if you cross it, you need to step up your management. I am trying to kick crossing that point down the road as much as possible.

I also do most of the cooking. I like food and playing with flavors. Cooking is an opportunity for positive health changes, and I've become more conscious about it. I use spice blends or chili peppers instead of salt, and we have meatless meals once or twice a week. I try to avoid processed foods. I started growing tomatoes to replace the canned ones, and the flavor of a real tomato, picked that afternoon and made into a sauce is unbelievable—and much of that flavor freezes and keeps. Those changes are not so much about diabetes, though, as about taste. Health is a nice side effect.

What have you learned from caring for your kids that would be valuable to people with type 2 diabetes?

Sometimes they tell people with type 2 diabetes to check their BG once in the morning, and I find that to be less than meaningless. My sister was visiting after she was first diagnosed with elevated blood sugars. She was supposed to test in the morning for a week and send her results to the doctor. She'd been given a meter with no instructions. I taught her how to insert a strip, load the lancet, all of it. And I suggested she try testing around things that she wanted to understand. It was actually based on an Accu-Chek® structured testing tool that was available at the time.

These before-and-after tests showed her that her numbers went up after meals, down when she went for walks and lots more. Seeing that helped her make changes based on learning.

What about your own diabetes care?

My kids have extra CGM (continuous glucose monitor) sensors here, so I've tried that. Seeing how my blood sugar was rising or falling, and the rate of change, was important—better than just knowing an absolute number at one moment in time. I could make more informed decisions to intervene. Wearing the CGM was how I found out my BG plummets at 11pm. I would want to eat the house. The CGM explained why. I've been ruling out possible causes—willpower, cycling, medication. I think it could be useful for anyone, whether they use insulin or not.

And now, diabetes advocacy isn't just a side job anymore.

I left banking a couple of years ago to get my master's degree in health communication. In one class, we studied the first Diabetes Social Media Summit, hosted by Roche in 2009. Funny thing is, I was there. Now I'm part of a new patient advisory council being started by the FDA. I'm looking forward to seeing where that goes.